Woman of the Year Honorees

Every year, my legislative colleagues and I each select one woman from our districts to honor as part of the California Legislative Women’s Caucus “Woman of the Year.”

Senator Richard D. Roth (D-Riverside) proudly honored Kathy Michalak, Habitat for Humanity Riverside’s Executive Director, as the 31st Senate District’s Woman of the Year. “Kathy has made a living out of being in touch with her community. Her work at the Los Angeles Times and Press Enterprise allowed Kathy to become intimately familiar with Inland Southern California,” said Senator Richard D. Roth (D-Riverside). “After 35 years in the newspaper industry she could have retired, but Kathy realized she had more to give, which led her to Habitat for Humanity Riverside.” Kathy Michalak first joined Habitat for Humanity Riverside in 2009 – becoming its Executive Director in 2014. Realizing that Habitat had no licensed construction personnel, Kathy earned her Contractor’s License and her EPA Renovators License, eventually becoming Habitat’s Construction Manager. Senator Roth continued: “Kathy is a tireless source of goodness and relief for Riverside County. I could not have picked a better person to be the 31st Senate District’s Woman of the Year." 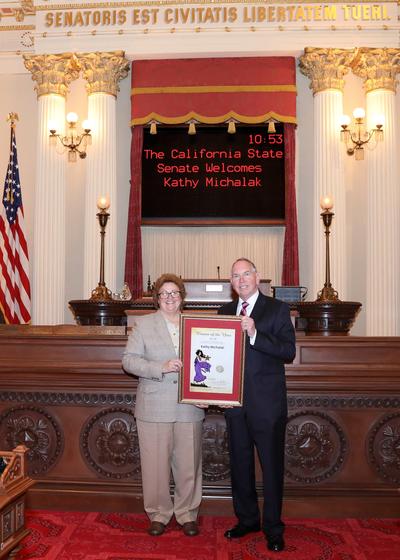 Senator Richard D. Roth (D-Riverside) proudly honored Estella Acuña, University of California, Riverside’s Chicano Student Programs Director, as the 31st Senate District’s Woman of the Year. “Estella has been making a measurable difference in people’s lives for more than two decades,” said Senator Richard D. Roth (D-Riverside). “Her remarkable work at UC Riverside has touched the lives of countless students – many of whom are first-generation scholars. Just ask any of the young men and women she has mentored, they’ll tell you without hesitation that Estella is a fighter who never gives up.Estella is a passionate advocate who tirelessly works to provide a sense of community for the students of UCR, making it a home away from home for many. It is her love, not just her dedication, to students and her community that makes her the clear choice for the 31st Senate District’s Woman of the Year. ” Estella Acuña is the first in her family to attend college. Acuña’s work at University of California, Riverside’s Chicano Student Programs has opened opportunities for thousands of people and created structures of support that have helped countless students earn their college degrees and move on to serve their communities. 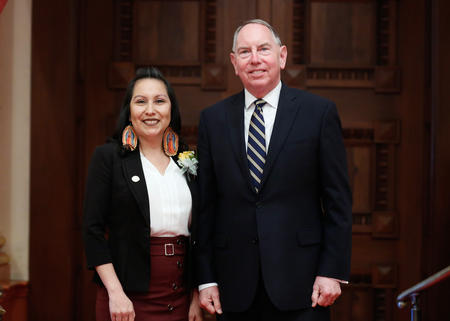 "I have the priviliege of honoring Ms. Michaela Williams, a Senior Community Program Specialist with the Department of Public Social Services in Riverside County as the 31st Senate District’s Woman of the Year. As part of the Adult Services Division and the C.A.R.E. program, Ms. Williams has been instrumental in protecting vulnerable adults and moving our region forward in our fight to end senior homelessness. Ms. Williams is a respected leader, outspoken advocate, and trusted resource who serves as a shining example of the incredible women who work to elevate those in need all throughout our region." 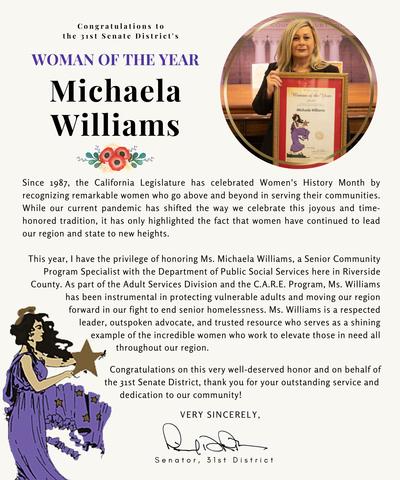 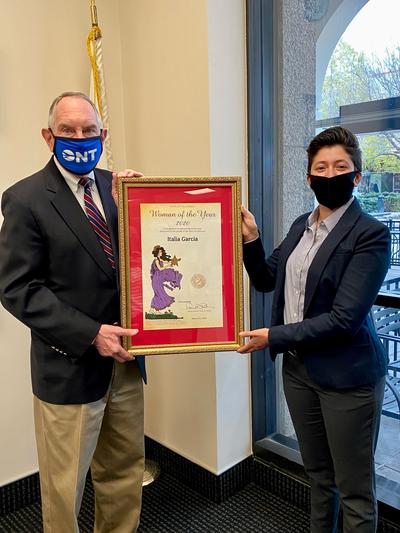 "I have the privilege of honoring Ms.Luz Gallegos, the Executive Director of TODEC Legal Center in Perris-- one of Inland Southern California's foremost advocates for immigrant families and their needs as the 31st Senate District’s Woman of the Year. Through her work, Luz has connected countless families and communities to the resources and services they need to become economically, socially, educationally, and civically empowered. Ms. Gallegos is a natural leader and trusted mentor who carries her family's legacy and spirit of commitment to the community in everything she does. She is a shining example of the incredible women who work to elevate those in need all throughout our region--and we can't thank her enough!" 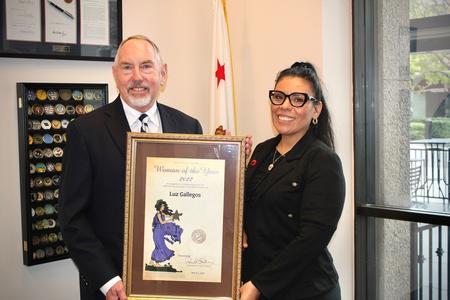